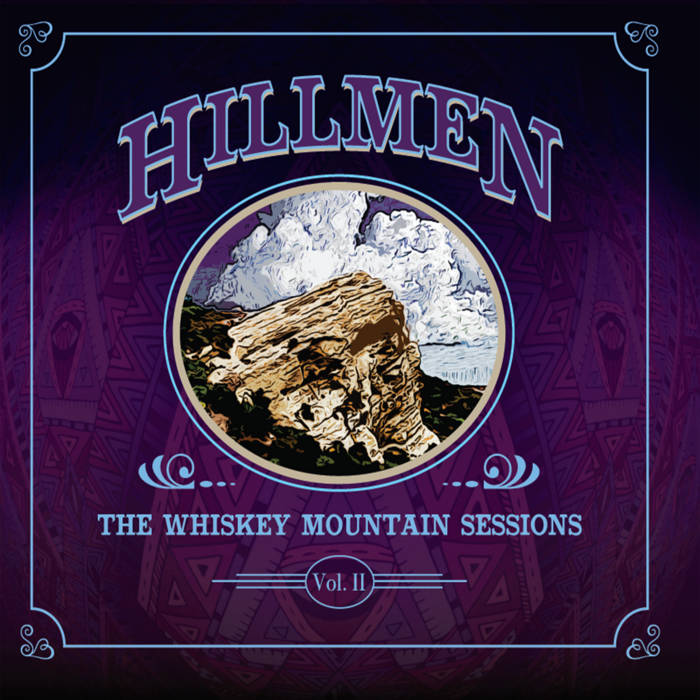 This CD is a special Limited Edition of 150 numbered CDs, and each copy is autographed by all members of the group.

The band performs in a style called Free Improvisation, which means Hillmen just tune up and play with absolutely no predetermined structure, rhythm or key and without the benefit or burden of a written score. All of the music on this second Hillmen offering was captured during one unparalleled evening session and is presented in the order in which it was recorded. This album is raw, authentic and totally honest – even down to the inclusion of band banter. You get the feeling that you are sitting in the room as the music is being formed right before your ears!

With the opening track, “The Long Way Home,” listeners are treated to an epic 20-minute excursion into the authentic world of a real Hillmen jam. As the whiskey begins to flow, so too do the dreamy synth stylings of Gayle Ellett’s Minimoog. These expressive sounds are supported by Jeff Smith’s powerful basslines, and are backed by the incredible polyrhythmic Jazz drumming of Peter Hillman. On “The Mestizo Insect Frog Jam” listeners literally ride waves of sound as they rise and fall, progressing into the album’s culmination, the energetic and powerful waling guitar solo of Lito Magana Jr. on, “Fire Breather.”

The traditional-yet-contemporary Hillmen sound is achieved by combining the classic tones of Rhodes electric piano and Minimoog with vintage guitars and amps and state-of-the-art recording technology. It’s the band’s mission to seamlessly blend elements of Jazz, Fusion, Jamband and Psychedelic music from the 1960’s and 1970’s with more modern sensibilities. Experienced enough to know when to lay back and not over play, Hillmen create music that is filled with strong grooves, beautiful melodies and some truly outrageous solos.

"I sometimes feel that composed music is simply trying to recreate and recapture that magical 'lightning in a bottle' that can appear during improvisation,” states Ellett. “With Hillmen we are trying to use the artistic concepts of theme & variation to create compositions that grow and evolve over time, hopefully resulting in an artistic representation of life itself. I know that sounds like crazy-talk, but it’s something to think about.”

This album was recorded the old-fashioned way: live-in-studio without overdubs, edits or computer manipulation. In order to keep a more lively, natural sound, only a small amount of compression was used in the mix of this CD, resulting in crystal-clear production.

"The band's improvisational output exudes an after-hours aura, as the musicians let their hair down and surge forward without boundaries." ALL ABOUT JAZZ (USA)

"Mixing, as they do a sultry rhythm section with an enthusiastic organist, this four-piece take ‘free’ to the extreme." SOUND ON SOUND (England)

"Overall, it's arguably the finest "real jazz fusion" album you've heard in ages, certainly one of the most emotive." DEAD EARNEST (Scotland)

"These tunes are part jazz, part post-rock, part progressive, but developed into a complete sound. This is a clear and vibrant work, and I know that this is an album that I’ll return to repeatedly." LEICESTERBANGS (England)

"The result is cutting edge jazz. An excellent acquisition. 9 out of 10" MANTICORNIO (Mexico)

"Hillmen have their own sound and go their own way, but the spirit of the late Sixties, early Seventies, is everywhere. For fans of jam rock this is an interesting acquisition. 3.5 stars out of 4” PROGGIES (Switzerland)

"These improvisations are of the most intimate jazz jams, while also moving through increasingly rocky passages with fiery guitar solos. It should be noted that the album has a crystal clear and vibrant sound." BABYBLAUE (Germany)

"Technically wonderful instrumental music that can transfix even the non-committed music fan. This jazz-rock-fusion is of high quality." CLASSIC ROCK SOCIETY (England)

"Fans of Santana, The Grateful Dead, and the Psychedelic music of 60s' and 70s' should find this to their liking." PROGNAUT (USA)

"Better examples of musical ensemble-interaction than Hillmen, are hard to find. Their music is in stark contrast to a market-driven legion of musical garbage that dominates the commercial market." MERLINPROG (Norway)

"Between Miles Davis' "In A Silent Way ', Soft Machine's fourth album, and the seminal experiments of such composers as Gary Burton, Larry Coryell and Graham Bond, the Hillmen have created four pieces of instrumental music-like taking a long road trip to the past." MOVIMENTIPROG (Italy)

"Quite an enjoyable set. This is improv jazz from an earlier time." AURAL-INNOVATIONS (USA)

"With its laid-back pace and easy, natural flow, the music is strikingly effective in evoking the beauty of the surroundings in which the album was created - though at the same time it may suggest the dim, smoky interior of an old-time jazz club, or also the mellow, informal atmosphere of an open-air festival. Conclusion: 8 out of 10" DUTCH PROGRESSIVE ROCK PAGES (The Netherlands)

"These sessions have produced an excellent album that shows us that improvisation and a catchy melody can indeed go together." IO-Pages (The Netherlands)

"This is music that is created in the moment and is overflowing with creative energy." PROGRESSIVE NEWSLETTER (Germany)

"They all interact naturally, with a certain attitude similar to the Miles Davis album "Bitches Brew." ARLEQUINS (Italy)

"The Hillmen's debut is an unexpected surprise that stands among the best of 2011." SEA OF TRANQUILITY (England)

"An organic sound that is intense and brimming with energy. This album is too short, considering its quality!” HIGHLANDS Magazine (France)

"What more can I say? Wonderful from start to end? Yes, that'll do it!"
AUDION Magazine (England)

Bandcamp Daily  your guide to the world of Bandcamp